"You'll have to do what?" is the usual reply when I explain to someone the probable process of saving '70s & '80s master tape recordings. It sounds like strange thing to do to a reel to reel tape, but it is an amazing idea (whoever came up with it!) that saves a decade of recordings that in any other way would be lost. And the reason why this needs to be done is quite odd in itself.

I often get sent vintage reel to reel tapes, and many automatically assume that simply because a tape is old, that it may not play properly unless it is baked. "This one's from the '60s, it'll probably have to be baked" is what I usually hear. In fact, recordings prior to mid-1973 will usually provide problem-free playback considering one important factor...that they have been properly stored. Vinyl records, photographs, film negatives and especially tape (whether it be VHS tape, 8-track or reels) is fairly susceptible to damage if exposed to extremes of heat, cold or humidity. Thankfully major labels and the tapes I've received from music producers like Norman Petty Studios or the Canadian Bob Hahn tapes were stored in temperature controlled conditions, and sealed away from drastic conditions for the most part. (hint: digitize your VHS tapes ASAP as well, they degrade simply from sitting on the shelf)

My biggest surprise was with the master tapes for the Eagle Records label that I picked up from Wes Nowosad at his rural Manitoba farm. The tapes had been stored in his outdoor shed with cats (Wes loved cats) wandering over them and some boxes even under snow. The boxes had moisture spots, mold and mildew on them, and I thought for sure the tapes were useless. Much to my surprise, the conditions were not extreme enough to damage the reel tape inside, but the smell of mold & mildew spores filled the air at the studio I ran them off at. The engineer and I were both on a diet of sinus pills for the next few days, and despite going through a few boxes of Kleenex, the preservation of the music made it worthwhile. Thankfully the recordings were mono, as there were dropouts on some of the right or left channels, but editing a final file to mono usually made for a good final track for the CD release.

1950s & '60s tapes do not need the baking process.
Then came a political issue in mid-1973. Israel had successfully pushed back incursions from Syria and Egypt during the Yom Kippur War, with the help of U.S. reinforcements. In response, The Organisation of Arab Petroleum Exporting Countries or the OAPEC said it would halt all oil exports to America while cutting overall production. What followed was a massive nationwide gas shortage and panic and by January 1974, world oil prices were four times higher than they had been at the start of the crisis. Manufacturers turned to use oil from whales, resulting in the great crusade to "save the whale"'. As a result of the environmental lobby in the US, tape manufacturers such as Ampex were stampeded into abandoning their traditional whale oil tape-binder (the binder is the material used to fix the tiny particles of magnetic oxide to the tape's flexible backing tape). Ampex's synthetic substitute, perhaps because it was formulated without the normal research and development, has since undergone some form of chemical breakdown and at the same time absorbed moisture from the air. The problem was identified but left thousands of reels of tape around the world to literally rot away.

Several articles and papers were published on the subject, and the general consensus was that baking the tape at a precisely regulated temperature for a number of hours would drive the water from the binder, making it stable enough to play.

How do I know if the tape I have needs this process?
All tape consists of three primary components: iron oxide, the "binder" or glue and a plastic carrier. Acetate, which does not stretch and can be brittle, was used until the sixties. Though its oxide color is typically reddish-brown, black oxides were also used. Mylar/Polyester eventually replaced Acetate. It handles stress well and never becomes brittle. Sixties-era Mylar tapes with black oxide will be the least problematic. 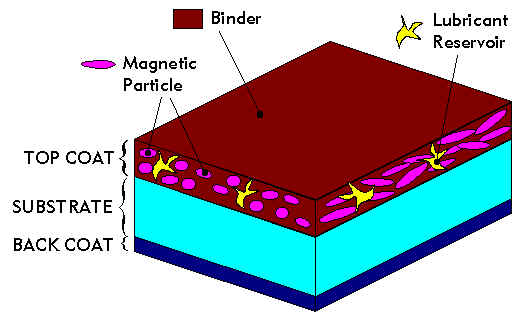 The degenerating tape has been dubbed "sticky shed syndrome". Oxide sheds at an alarming rate and sticks like a thick black glue to the player heads and tape guides. The first thing you notice is a screeching noise as the moving tape is bowed by the contaminated heads or guides, and this physical modulation transfers itself to the audio. The top end is usually dramatically reduced and after just a few minutes of play the friction may cause the machine to grind to a halt. The tape actually sticks to the heads and pulling it off can dislodge more oxide, increasing the risk of irrecoverable dropouts. 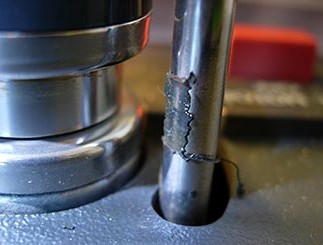 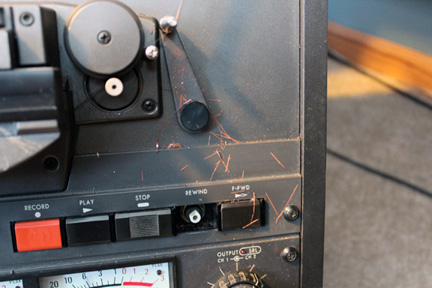 My quick observation is that pre-1973 tape has a light brown appearance. Post-1973 tape has the same uniform color: a dark brown/black color.

Here is a listing of tapes that need baking, compiled from information reported by members of the Ampex Mailing List:

How to bake a tape:
Now as for methods of baking I've heard all types of home-remedy concoctions (convection ovens, hair dryers, etc.) that will likely do more damage than solve the problem, simply because the temperature  is inconsistent. The most elegant and affordable solution is a food dehydrator. Not only good for tape-baking, but you can whip up some jerky or dehydrated fruit when not in service! The Nesco brand "Snackmaster" has an adjustable thermostat and a built-in fan to circulate the air, and has no dangerous magnetic fields. When baked, the tape will expand and become loose around the hub. For this reason, it is best to use flanges to protect the tape from coming apart. Cooking temperature should be between 130°F and 140°F. Tapes wound on plastic reels with small hubs should be rewound onto large reels with NAB hubs. 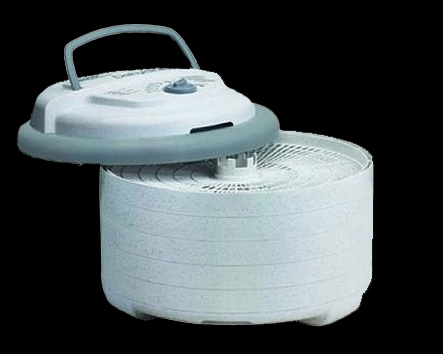 Provided the wind is smooth, you can bake a quarter inch tape at 135°F for two hours flipping every half-hour.  You will find that cooking time varies with tape width, type, brand, condition and the number of reels being baked.  Ampex tape from the seventies might require twice as much time as 3M tape from the eighties.

To improve shelf life afterwards, I recommend wrapping the tape in a plastic bag and including a Silica Gel pack to absorb moisture.

What to watch for:
Tapes that have been poorly stored with an uneven wind will require extra care, as baking unevenly wound tape will damage the edges because they get too hot and then you'll have permanent artifacts in the stereo output.

How long does it last?
Many assume you get one play out of a baked tape, and then it is no longer playable. Tapes should replay satisfactorily for at least three months after treatment if they are kept in a low-humidity environment. If kept in, say an airing cupboard after treatment, they will probably remain playable forever. The heat treatment process can be usefully repeated. If tape has degenerated after the first treatment, it can be restored again by a second, or subsequent treatment.

Of course a quick solution is to send your tape to Super Oldies to do the baking and reel run-off for you!

As always, I welcome your additions, corrections and feedback on this article. E-MAIL

"I actually used this article when I was doing research on how to bake the reel-to-reels that were damaged - and it worked like a charm once I got what I needed.  Even half the cassette tapes would have been unplayable if it weren't for this baking process.  It has certainly helped to preserve a lot of important history that would have otherwise been inaccessible.  Thank goodness for people like this who figure out these amazing remedies.